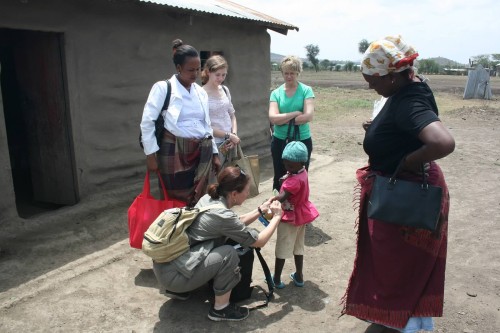 Kimberly A. Shriner, MD, founder and director of the Huntington Hospital-based non-profit The Phil Simon Clinic, a multidisciplinary facility that provides comprehensive medical and psychosocial care for persons infected with HIV, always knew she wanted to go to Africa after watching the feature film Born Free as a child. Though she was not sure when, how or why her travels would take her there.

But as an old Tanzanian proverb says, “A wise person will always find a way.”

And so she did in a most remarkable process; turning what started as a small passion project into a more than decade long journey spanning two continents and changing thousands of lives along the way.

Enter The Phil Simon Clinic Tanzania Project. Its goal: For Shriner and her team of volunteers to work in conjunction with several government and private health care facilities in Arusha, Tanzania to provide clinical care, education, psychosocial support and infrastructure assistance to those agencies involved in HIV/AIDS, internal medicine and orthopedic and reconstructive surgery.

The project began in 2000 at a time when the HIV epidemic was raging throughout sub Saharan Africa. In 2002, the first team from Huntington Hospital traveled to Arusha, Northern Tanzania to evaluate the goals of the project. HIV support groups were formed and basic medical clinics were part of the first trip as was an assessment of hospital and healthcare facilities. Most of the widely used antiretroviral medications were not available in Tanzania at that time. Fortunately, Tanzania became a designated country for PEPFAR (The Presidents Emergency Plan for AIDS Relief) and other international assist programs that would finally provide the much needed medications. Through the years, the Phil Simon Clinic Tanzania Project has watched HIV disease become a manageable and treatable disease in Africa with encouraging results.

Since the first trip in 2002, the project and team members have grown exponentially. To date, more than 120 professionals-physicians, specialists, surgeons, nurses, social workers, pharmacists, laboratorians, veterinarians, administrators, carpenters, school teachers and school children and many other talented people have given their time and talents to the people of Tanzania. During their most recent trip in 2014, Shriner and the team helped more than 1000 patients, performed 42 surgeries, conducted numerous home visits and engaged in large animal veterinarian actives, all in addition to educating and training the healthcare community. 2014 also marked the first trip with a pediatrician and well respected Mark Powell, MD was moved by the fact that he was the first pediatrician to see many of our children.

This year’s Team Tanzania is comprised of a 28 talented professionals, many who work at Huntington Hospital. The volunteers, who generously donate their time, energy, money and resources to attend and participate in the trip, include adult and pediatric physicians, nurses, social workers, microbiologists, kinesiologists, pharmacists and more. This year also marks the first time a dermatologist is on the team as well as two small animal veterinarians.

The Phil Simon Clinic Tanzania Project has long been committed to healthcare education and graduate medical education. Internal medicine and surgical residents have been participating in trips to Africa for many years.

The Resident Physicians trips are sponsored by Huntington Hospital as The Phil Simon Clinic outpatient center is a leading teaching venue for internal medicine residents. The hospital also contributes to the Tanzania Project by buying meds that are given free to the patients in Africa.

Upon arrival in mid-February this year, the team will continue their involvement at local hospitals and clinics by assisting with clinical care, ward rounds and hours of teaching and shared experiences. To date, the Upone Charitable Medical Centre, Mount Meru Regional Hospital, St. Elizabeth’s Hospital, Meserani and Endulen Clinics are among the venues that have or are presently receiving assistance and education from the Tanzania Project.

Team members including social workers, nurses, residents and veterinarians also participate in a robust Home Based Care Project, working closely with local organization, Africans By Africans, where they visit homes of the underserved population. Point of care services will also be provided with ultrasound, pharmacy and other technical support while Epidemiologic, cultural and global outreach projects will continue as well.

As Team Tanzania 2016 gears up for its 10th trip to Africa, Shriner is once again looking forward while giving back.

“This year we will aggressively continue the process of transitioning from doers to teachers,” said Shriner who shared the exciting news that plans for construction will begin in Africa on the Kisongo Clinic, a medical institution that the Tanzania Project and its generous donors and supporters are funding. “We want to show the local medical staff how to help, diagnose and treat people on their own with what limited means that they have there. We share our knowledge and expertise with the intention of empowering them so that they can continue their critical work, independently, once we leave. Ours is a very collaborative project where the sharing of experiences back and forth enriches all of our lives.”

Supervising the new clinic will be Ezekiel Moirana, MD, an extraordinary man with an extraordinary story. A native of Kisongo, Ezekiel was first introduced to Shriner and the Tanzania Project during the team’s third trip to Africa when he was working as a Clinical Officer (aka physician’s assistant) at the Upone Centre.

Upon the team’s return two years later, Shriner met with Ezekiel who, though then volunteering at an orphanage, expressed his desire to become a doctor.

Viewing this as a long-term investment for the future, the Tanzania Project, along with an incredibly generous donation made by Martha White and her family in honor of their late son Judah, put Ezekiel through five years of medical school and four years of residency in Tanzania. Also a resident at Huntington Hospital at the time of his death, Judah’s legacy is now carried on by Dr. Moirana.

“Humanity is really the same no matter where you are,” continued Shriner who credits Jane Goodall, who encourages people to support the Tanzania Project, as one of her mentors. “Now we want to find another Ezekiel and a woman to put through medical or nursing school.”

Continuity has been key to the Tanzania Project’s success.

“At the beginning we had to prove that we were invested in the people and community as a whole. We had to gain their trust and did so by returning year after year,” said Shriner who is now affectionately called “Mama Simba” by the appreciative villagers who light up each year the team returns. “It’s the person to person interactions that are most important and continuing to come back.”

Solomon Ole Logilunore, MD, who runs the Upone Charitable Medical Centre, echoes that sentiment when speaking to Shriner about the Tanzania Project. “Most organizations come to show their teeth,” he said. “You show us your heart.”